All in the family at Duck Pond 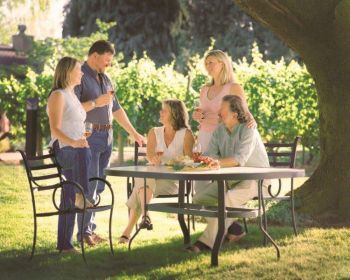 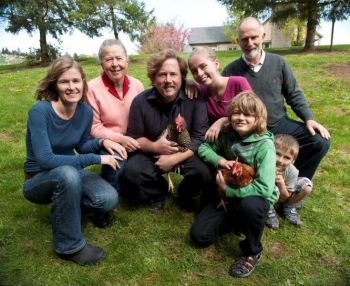 Joe and Pat Campbell with their son, Adam, daughter-in-law, Carrie, and grandchildren, Georgia, Silas and Francis (youngest) gather at one of the Elk Cove's vineyards. 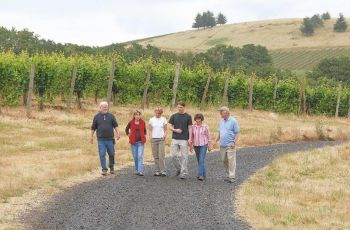 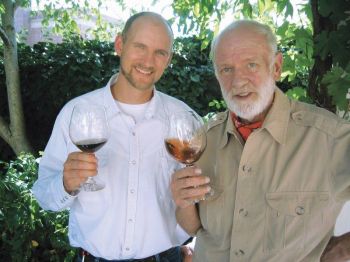 Jason Lett shares a glass of wine with his father, the late David Lett, of The Eyre Vineyards. 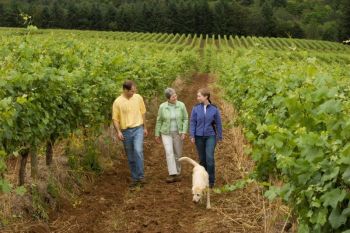 Susan Sokol Blosser walks the vineyard with her children, Alex and Alison, and Andre, Alex's dog.

When the extended Fries family gets together, it amounts to a Duck Pond Cellars management meeting. The Duck Pond wine business is truly a family affair.

In 1993, Doug and Jo Ann Fries couple founded what has become Oregon’s fourth-largest winery. But the history behind Duck Pond goes back many years before that, centered on Doug’s love of growing things.

Fries farmed row crops in California’s Central Valley until 1982. Then he moved to the Yamhill Valley and planted a hazelnut orchard.

The wine bug bit him in 1985. He put in 12 acres of pinot noir off Fulquartz Landing Road that year, and has continued planting new vines ever since.

In 2000, he added the 52-acre Sacagawea Vineyard to his Wahluke Slope holdings. In 2008, he acquired a site near Sutherlin in Oregon’s Umpqua Valley and began planting the 358-acre Coles Valley Vineyard.

Total vineyard holdings in Oregon and Washington have soared to more than 1,100 acres, with no plans to quit there. But these days, Doug first has to clear moves with his wife, Jo Ann, his son, Greg, his daughter-in-law, Amber, his daughter, Lisa, and his son-in-law, Scott, not to mention his winemaker, Mark Chargin.

When they built their winery at the eastern end of Dundee in 1993, Doug and Jo Ann worked as a team, he handling the growing and processing, she the administration. Meantime, Greg attended the University of California at Davis, where he studied agribusiness, vineyard management and fermentation science.

After graduating in 1994, he assumed winemaking duties at Duck Pond. He retained the position until 2010, when Chargin became head winemaker.

It wasn’t long before Lisa began helping her mother run the office side of the business, then overseeing day-to-day administrative operations. Lisa’s husband, Scott, became head of sales and marketing, while Greg’s wife, Amber, took on promotion and public relations.

“So what’s with the duck?” people often ask. Doug and Jo Ann lived on Duck Pond Lane, which passed by a duck pond. In the end, that attachment stuck.

Management of the Washington operation fell to Greg, who brought Chargin in from California to help in 2007.

The two brands – Duck Pond in Oregon and Desert Wine in Washington – are distributed in 44 states and 28 countries.

The winery has been a family affair from the outset, and the Fries family member share a commitment to making value wines of high quality.