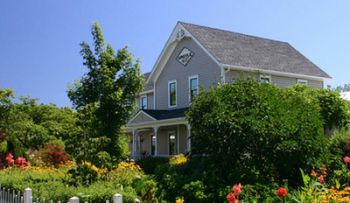 Not all local wineries have their roots here in the Yamhill Valley. Patrick Reuter and Leigh Bartholomew are a married couple who took a long and twisting route before settling into a new winery, Dominio IV.

Oregon-born Reuter met Bartholomew, a Navy brat who grew up in ports around the world, at the University of Oregon. The first time she set eyes on Rueter she said to herself, “He's going to be my boyfriend.”

After graduation in 1992, the couple decided to experience more of the world, starting in Yokohama, Japan, where her father was stationed. They taught English and traveled the country for eight months.

Returning stateside to Seattle, both caught the wine buy. She took winemaking classes at Seattle Central Community College while Reuter did lab work at the University of Washington. They were married at McMenamin's Edgefield in Troutdale, and both were accepted at the internationally acclaimed viticulture and enology program at the University of California at Davis.

While for the next program slots to open up, they followed the wine harvest from Chile to New Zealand before returning to immerse themselves in the two-year U.C. Davis program. Grape growing engrossed Bartholomew, while Reuter specialized in soils. When the urge to travel overtook them once again, it was off to Vietnam, India and Russia, then on to the Burgundy region to work harvest in the vaunted wine village of Gevrey-Chambertin.

Finally, in 2000, then settled in the Yamhill Valley. Reuter found a spot at Rex Hill, and Bartholomew, nearly simultaneous with the birth of their first son, landed a vineyard management position at Archery Summit.

While she remained in her rewarding position at Archery Summit, he worked to launch their own wine brand. The new winery became a reality with help from the Columbia Gorge and the Carlton Winemakers Studio.

They found a predominantly southeast-facing, 30-acre site near Mosier in the Gorge, and determined that half the acreage was suitable for wine grapes. Meantime, her parents decided to visit, and soon found themselves as vineyardeists and hosts of a new B&B there.

The parent agreed to follow the couple’s requirement that farming be carried out according to the stringent, holistic principles of Biodynamics that merged ecology and sustainability, joining a handful of Oregon wineries that faithfully employ the Demeter International standards of Biodynamics.

Eight acres have been planted to tempranillo, viognier and syrah, and the couple sources pinot noir from selected Yamhill Valley sites.

If imaginative wine names stimulate the mind of a poet, then Reuter has found his muse — The Arrow and The Berry Tempranillo, You Write in Wine Syrah, Still Life Viognier, Spellbound Syrah/Tempranillo blend, and Technicolor Bat Tempranillo/Syrah blend.

The Dominio IV Tasting Room in McMinnville’s Granary District is proof that there are many many life paths leading people to wine industry of the Yamhill Valley.