Around the foodie world in eight blocks 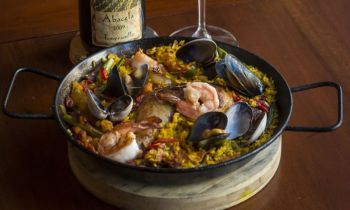 One outstanding characteristic of downtown McMinnville’s dining scene is the diversity of experiences available in such a small district. Here’s a quick trip around the culinary world without leaving the eight block radius.

Start in the metropolis of New York City for (what else?) pizza. 3rd Street Pizza has been serving New York-style, hand-tossed pies since 1997.

Then fly over the pond to the Iberian Peninsula for an experience at the chic La Rambla for Spanish influenced tapas, drinks and entrées.

Next head to Bistro Maison and enjoy mouthwatering fondue and other selections from the authentic French menu.

Unfortunately, McMinnville lost a favorite eatery in 2014 when Kame, a Japanese restaurant and sushi bar, closed its doors. However, for those looking for Asian cuisine, Thai Country Restaurant delights with pad thai, curry dishes and much more.

Now onto the Latin culture: A stop at Pura Vida Cocina & Arte is a must. Heading north (almost home), you’ll find some Guadalajara standards at the family Mexican joint, Los Molcajetes.

Finally, back to America. But before you return to the Northwest, stop by Gem Creole Saloon for a sample of New Orleans.
And that’s how you can take a trip around the world in just an eight-block walk.