Arts & entertainment in the Yamhill Valley 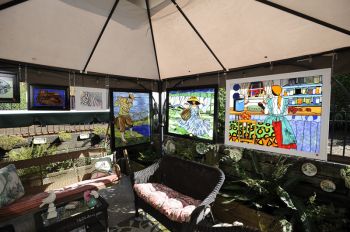 Glass works by local artist Ralph Kraft at his home in McMinnville, open during the 2014 Art Harvest Tour. Photo by Marcus Larson 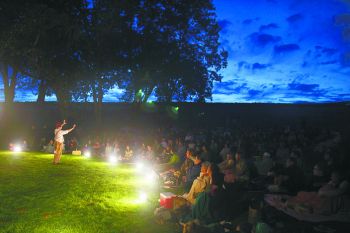 The Yamhill Valley offers plenty of opportunities to enjoy music, theater and the visual arts.

During the summer, there are two series of free outdoor concerts on Tuesday nights and Thursday lunch hours. And both draw avid crowds.

On Tuesday nights in July and August, bands perform in the picturesque Oak Grove gracing the Linfield College campus. McMinnville Parks and Recreation and the McMinnville Rotary Club combine forces to sponsor the series.

At noon Thursdays, people gather with sack lunches to enjoy a variety of musical acts. The McMinnville Downtown Association sponsors the Brown Bag Concert Series, which runs from early June through late August.

On Tuesday evenings in July and August, Tunes on Tuesday draws a crowd to Newberg’s Rotary Centennial Park.

Another summer concert series, this one carrying a modest admission charge, takes place at the Evergreen Aviation Museum on Friday nights. Watch for announcements of dates and details.

Singers and bands are regularly featured in the Cellar Bar at McMenamins Hotel Oregon, at Third and Evans in the heart of McMinnville Downtown Historic District. Cornerstone Coffee, at the west end of Third Street, hosts open mike sessions for budding performers the first Wednesday of each month, along with concerts each Saturday night. The Moonlight Theater at 3rd Street Pizza also features live music, as do several local taverns.

The Walnut City Music Festival will make its second appearance this year. Bands from throughout the Northwest will be featured at the event, scheduled the first weekend of August in McMinnville’s historic Granary District. The district lies just northeast of the downtown core, within easy walking distance.

In other parts of the county, music is featured at festivals during the summer and year-round in selected venues. Willamina boasts one of the most popular live-music venues at The Wildwood Hotel, attracting performers from all over the region, as well as closer to home.

The weekend of July 18-20, the Wildwood will sponsor its third-annual Americana and roots festival, featuring a full menu of music at the Roshambo Art Farm.

Displays also abound at Currents Gallery on Third Street, the Lawrence Gallery on Highway 18, Arts Elements and George Fox College in Newberg and many more. Both McMinnville and Newberg offer monthly art walks. McMinnville’s is held downtown on the third Saturday of the month, Newberg’s on the first Friday.

In the West Valley, the Willamina Chamber of Commerce sponsors the Coastal Hills Art Tour each November. Call 503-876-5777 for details.

The McMinnville Community Center hosts traveling acts from time to time — military bands, for instance, or performances by the Missoula Children’s Theatre. Around Thanksgiving, the popular Oregon Trail Band stages an annual concert to open the holiday season.

Willammette Shakespeare performs among the vines annually at Stoller Family Estate. “The Taming of the Shrew” will run July 31 to Aug. 2.