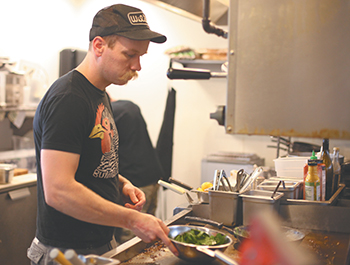 Rockne Roll/News-RegisterKyle Christensen is chef at The Diner.

The comfortable, familiar routine of Sunday night family dinner around the kitchen table is far from gone, and at The Diner in McMinnville, chef Kyle Chriestenson is happy to provide the kitchen, the table and (in the form of fellow diners) the family around it.

Starting at 4 p.m. each Sunday afternoon, The Diner hosts ‘Sunday Supper,” Chriestenson’s reinterpretation of a Sunday home-cooked meal. The fare, which occasionally departs from The Diner’s typical menu, centers around “just like mom used to make” dishes.

“It’s usually like fried chicken or meatloaf or lasagna,” Chriestenson said. “Sometimes, it will be a roast and there will be a carved roast out, whether it’s roasted chicken or roasted pork loin. There’s almost always some sort of potato side, whether it’s potatoes au gratin or mashed potatoes, and vegetables.”

Each dish is served in it’s own container. A recent visitor for Sunday supper witnessed the presentation of a large section of home-made meatloaf, generously coated in Chriestenson’s mustard-infused traditional meatloaf sauce, a bowl of mashed potatoes and a bowl of creamed spinach along with empty plates for the table.

His own home was where Chriestenson had the idea for his restaurant’s Sunday Supper.

“In my growing up, Sunday night has always been a family night, everybody was there and my mom would make a supper and serve it. The whole family-style idea was to make it something reminiscent of my childhood,” he said. “I wanted to have that sort of something to offer the community, somewhere you could go to get together with friends and family and sit down and have a meal. The more people you have, the more fun it is.”

That type of crowd depends on a variety of factors, but Chriestensen said that as many as 30 people will show up, gathered around a long row of tables in the center of The Diner’s dining room in such a way that they could pass for, well, family.
“It’s pretty menu-dependant,” Chriestenson said of Sunday Supper’s week-to-week turnout. “Just like anything in the restaurant business, it’s hard to predict.”

It’s also sometimes hard to guess how the unsuspecting guest will react to the unusual event. With The Diner’s location near a cluster of hotels, road-weary travelers frequently wander in around the time Sunday Supper is being served.

“People come in thinking, ‘Oh, I’ll see if I can get a cup of soup or a salad,” and find they can get fried chicken or meatloaf or something,” Chriestensen said. “Some are really excited, and some really want that cup of soup.”