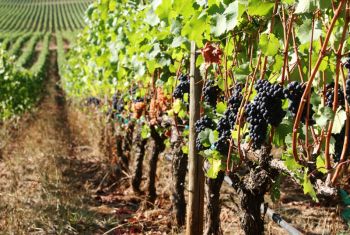 Rockne Roll/yamhillvalley.com
Grapes ready to be harvested at Stoller Vineyard.

Every year, Mother Nature has the final say on the winegrape harvest. And since Oregon's North Willamette Valley represents a cool-climate growing region, she can conjure up challenges for vineyardists at almost any turn during the growing season — or not.

Over the past four seasons, nature has exhibited both motherly and mean streaks. Fortunately, growers were better prepared than ever to dodge or overcome the fits she threw in her meaner moments.

In the end, variability among the 2010, 2011, 2012 and 2013 vintages turned out to be more a matter of what level of good we tasted than anything else. There were no bad vintages, only good, better and best ones.

The 2014 harvest, which just concluded, is being heralded as the best ever in both quality and quantity. The same was said of the 2012 harvest, but the enthusiasm resulting from the 2014 harvest is so unreserved it cannot be ignored.

But all things in good time.

The focus here is on the 2010-2013 pinot noirs from the Yamhill Valley's six AVAs. By association, it can be surmised the AVAs' other varieties, notably pinot gris, chardonnay and riesling, fared similarly.

In 2010, Yamhill Valley vintners earned the ultimate reward of stunningly flavorful, beautifully balanced grapes. But on average, they ended up with 25 percent less tonnage than normal. Some suffered even larger losses.

There were two causes: A wet and cool spring delayed development and diminished fruit set. Rapid growth and ripening followed late in the season, attracting an aggressive invasion of birds seemingly on the edge of starvation.

The remaining grapes thrived in beautiful weather that lingered well into October. The result was a purity of flavor and depth of concentration a consensus of top tasters felt matched Oregon's best to that time.

But due to the diminished volume, 2010s are hard to find. With the possible exception of a serious wine merchant here or there, or perhaps a restaurant wine list, the only likely source for a bottle or two of this exceptionally fine vintage would be a winery tasting room.

Even then, many wineries no longer have any left for sale. And those that do may be escalating the price, proportional to age and quality.

If you can find one from a noted producer, expect to pay $60 to $80 a bottle, if not more. But if you're into Oregon pinot, and want to experience wine from a great year as it begins to develop some bottle age, now is your opportunity.

Otherwise, you can stash it away in your cellar and wait a few more years. Then you will have a vintage experience really worth bragging about.

The industry will long remember what nature had in store in the 2011 growing season. It set an all-time record for both length and coolness, extending well into November.

Given the persistently low temperatures throughout the summer, the normal late-October arrival of rain might have spelled disaster. It could have produced a truly failed harvest for the first time ever.

But as luck would have it, the usual rain did not arrive in October. Unseasonably temperate weather held through mid-November.

As a result, the crop eventually achieved full ripening. That has led some to call it a “miracle” harvest.

As precariously prolonged as the season was, the best wines proved more than satisfactory, with complex flavor profiles accompanied by record quantities.

Lauded for delicacy and balance by some, but faulted for lightness and low alcohol content by others, the 2011s are winemakers' wines. They demonstrate how deftly even difficult vintages can be dealt with these days.

These wines don't deliver loads of juicy fruit and youthfully assertive tannins. They express themselves in a more refined manner. They reveal themselves through depth and subtlety, layers of flavor, hints of earth and minerality — i.e. terroir, the quintessential sense of place.

Many industry professionals and consumer aficionados prefer such pinots, because they afford an experience of which no other red wine is capable.

However, such heights were reached by only a few producers. Whereas the best of the bunch demonstrate what was possible from the vintage, the majority of 2011 pinots proved merely good.

That being the case, it is likely that some of them can still be found at much more modest prices than the 2010s. And with the effusively praised 2012s now reaching retail shelves, they may begin to look like amazing bargains.

The 2012 vintage was almost universally declared one of the best, if not the best, in the history of the Oregon wine industry. Stratospheric levels of acclaim put everyone in a near state of euphoria.

Some thought it might never occur a second time. But the early prediction is that 2014 will ultimately prove an even better vintage.

Let's not cast the 2012s in a lesser light just yet, though. While all signs point toward greatness for the 2014 vintage, it remains an unproven upstart at this writing, whereas taste test after taste test has confirmed the validity of all the accolades heaped on the 2012.

Interestingly, cool weather at fruit set caused some shatter, leading early prognosticators to conclude the 2012 would be a low yield harvest in the Yamhill Valley. That prediction was quashed when the tonnage figures came out.

After a two-year hiatus, summer returned in force in 2012, basking the valley in warm temperatures over the course of the entire three-month period. Picking through the first three weeks of October culminated in a near perfect harvest, marked by ripe, clean fruit with concentrated flavors and excellent balance.

So much positive press has resulted that it would be redundant to do anything more than make reference to it. Here's an example: "For 2012, Yamhill Valley pinot noirs are of unparalleled quality across the board, and the same thing applies to the other varieties."

That means top wineries are now releasing, or soon will be, what may prove some of the finest pinot noirs ever made in Oregon. We can only hope prices don't soar as a result.

To read about 16 excellent examples of recently released 2012 Oregon pinot noirs, ranging in price from $19 to $45, pick up a copy of the November 2014 issue of Oregon Wine Press.

Consistent warmth through the growing season put everyone in a positive mood. When an unseasonably warm spell in mid-September hastened ripening, the mood turned positively gleeful.

And then the rains fell.

Those who waited out the late September rains were able to get rid of the bad stuff on the sorting table and ended up with beautifully ripe fruit. Those who picked beforehand got some greenness. Those who chose to harvest during breaks between storm systems struggled to diminish the effects of dilution.

Those features introduced a note of variability, even within different cuvées from the same winery. But at its best, the vintage is producing flavorful wines displaying elegance and delicacy reminiscent of well-balanced Burgundies in the classic style.

A few winery tasting rooms have started to pour a 2013 pinot, and some larger-volume examples are beginning to appear at retail. The majority will be released over the coming months, culminating next spring and summer when reserve offerings reach the market.

Costs will typically range between $20 and $35 for earlier releases and $40, $50 or more for reserves and individual vineyard wines. A few lighter styles will sell below $20.

Welcome to the Yamhill Valley, where you will always have a very good Wine Country visit, if not a better or even best.