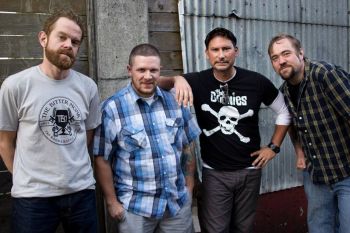 The pub is hopping, the band is original. They sound like Oregon. You hear poetry in the music that speaks of the ocean, the rain, the desert, life, love and loss. Some of it sounds somber, but it is also so cheerful, even optomistic. It's truly original. The subtle but solid drums, bouncing rollling upright bass, emotive electric guitar, angelic vocals. You ask the person next to you, “ Who are these guys?” They reply, “It's Ships to Roam.”

Ships to Roam was born in 2005 as the solo project of singer/songwriter Jerome Blankenship. Funeral Songs & Lullabies, StR's first album was released in 2006 to critical acclaim. Ships to Roam played Portland alongside acts such as Horse Feathers, Kind of Like Spitting, A Fine Frenzy, Bryan Free, and Alela Diane. In the following years Blankenship wrote new material, raised a family and attempted to find a band. Finally after years of searching, a four piece band that brings an exciting, danceable twist to the music was formed in McMinnville Oregon.

Will Sykes, Texas native and accomplished songwriter, plays both the upright and electric bass and backs Blankenship on vocal harmonies.

Morgan Riha, former state fiddle finalist and lifetime musician plays electric guitar. His writing is both expressive and original, pulling from an array of musical stylings from bluegrass to jazz.

John Knight, Hawiian transplant to Oregon's wine country brings an island twist to some of the music and keeps the live show lively with his years of eperience as a drummer/percussionist.