The AVAs of the Yamhill Valley 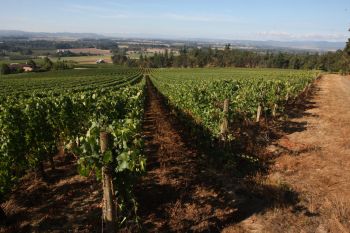 Stoller Vineyards lies on the edge of the Dundee Hills AVA. Photo by Rockne Roll

An American Viticultural Area designation is granted by the federal government. Only contiguous, specifically delineated geographic areas with common soil and climatic conditions can claim such designations. That’s because those shared conditions will impart characteristics on the grapes grown there and the wine made from them.

This is important for any wine, but more so for Pinot noir, with its unique ability to reveal subtle differences. When in pursuit of a rewarding wine experience in the Yamhill Valley, consider those six different AVAs — Dundee Hills, Yamhill-Carlton, Chehalem Mountains, Ribbon Ridge, Eola-Amity Hills and McMinnville.

The Dundee Hills, established in 2005, encompasses 12,500 acres — with more than 1,700 planted to vines — and overlooks the Willamette River to the south and the Chehalem Valley to the north. The Coast Range provides protection from the ocean climate.

The unique characteristics of the soils from this region began developing between 15 and 17 million years ago when basaltic lava flowed west from Eastern Washington to the Dundee Hills. While in most parts of this region the basalt eroded over time, a few ribbons of these ancient volcanic flows remain in the red hills of Dundee and their iron-rich Jory soils.

Established in 2006, the Chehalem Mountains AVA consists of almost 70,000 acres with over 1,600 planted to winegrapes. Three soil types are represented, basaltic, ocean sedimentary and wind- and flood-deposited soils called loess.

Established in 2006, the Eola-Amity Hills AVA is almost 40,000 acres with more than 1,300 planted vineyards. The region is adjacent to the Willamette River and composed of the Eola Hills in the southern end and the Amity Hills in the north.
Aeolus, the ruler of winds in Greek mythology, was the namesake the pioneers attached to one chain of hills surrounding this area, and for good reason. The cool, coastal winds flowing into the region from the Van Duzer Corridor are largely thought to play a key role in the style of wine produced here. The most prevalent soil, volcanic Nekia, is also a major part of that equation.

Established in 2005, McMinnville AVA is home to nearly 40,500 acres, 600 covered in vineyards, extending roughly 20 miles south-southwest toward the mouth of the Van Duzer Corridor. The soils are primarily shallow uplifted marine sedimentary loams and silts, with alluvial overlays and a base of uplifting basalt. The volcanic material is some of the most youthful in the Valley, creating dark, intense wines.

Established in 2005, Yamhill-Carlton contains 60,000 total acres and lies north of McMinnville at the foothills of the Coast Range and centered on its namesake towns of Yamhill and Carlton. The AVA is surrounded by low ridges in a horseshoe shape called the Spencer Formation, with the North Yamhill River coursing through.

Favored with some of the oldest soils in the Valley, Yamhill-Carlton features ancient marine sediments. The coarse granular nature of the soil drains quickly, establishing a natural deficit-irrigation effect. This trait encourages vines to dive deeply into the parent material bedrock for nutrients.

— Excerpt from the Oregon Wine Press