Valley cuisine is its own art form 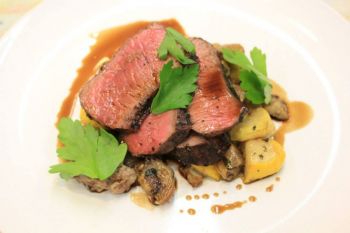 Everybody gets hungry, and food is a necessity of life. But food can be so much greater than sustenance. It can be an art form, both in presentation and flavor. This has been the direction of the restaurant scene in the Yamhill Valley for some time now. And as a cadre of young, creative chefs establish themselves while paying respect to the few foodie pioneers, the product they collectively produce has taken on a style of its own: Yamhill Valley Cuisine.

What is Yamhill Valley Cuisine?

The style of food that predominates in the area has a number of defining characteristics. Freshness is obviously a desirable trait in any food, but the reason that the fare here is particularly fresh is that it’s local; the ingredients are grown here, they’re produced and processed here.

When Morgan Riha, kitchen lead at McMinnville’s Community Plate, lists his local suppliers, it becomes obvious that the farm-to-table concept isn’t just a feather in his establishment’s hat, but a way of life.

“We get our salad greens from Oak Hill Organics, they’re a big supplier. We go through Carlton Farms for all of our pork,” he says, and his list goes on.

Even most locally-focused establishments buy sausages and other processed meats. Community Plate, like many restaurants in the Yamhill Valley, make their own.

“All of our meats are smoked here; we make sausage here. It’s very important, it’s one of the things that’s becoming more popular in this area — the fresh, farm-to-table idea,” Riha said. “It’s going to bring the quality of the food up, and it’s going to keep people coming back.”

Locally grown also means seasonal, which can limit what chefs are able to offer from time to time. But it also provides a springboard for inspiration. Jesse Kincheloe, owner and chef of Valley Commissary in McMinnville, explains how in the winter months, squash and hearty greens like chard are the produce du jour, and it’s important for him to find something new to create with the seasonal ingredients.

“It’s finding ways to make those new, more inventive. Come spring and summer, it’s everything from peppers to English peas to fava beans. It’s ordering it first, and seeing what we want to make with it second, not just ordering one thing from a farmer,” he said. “We don’t want to get tired, we don’t want you to get tired by having to eat the same thing. That’s why we challenge ourselves to challenge you to not order the same thing. We want to make people more curious than just full.”

For example, Bono Solorzano, the head chef of Barrel 47 in Carlton, is famous for his fish tacos. But they’re unlike any fish tacos you’ll find anywhere else.

“We have our own creation with the coleslaw; it’s not a mayo base, it has bell peppers, lime, fresh cilantro, oregano,” he explained. “We use a blue corn tortilla, fresh cod fish and a homemade chipotle aioli goes on it. Those are awesome.”

That re-imagination of a classic dish is common across Solorzano’s and other local chefs’ menus. It’s a point of pride for him to serve something that customer might not expect.

“I just wanted to make something different, I wanted to do something on a high level,” Solorzano said. “We don’t use what other places use. We try to stay fresh. That’s very important to me.”

With so many chefs and ideas crafted into cuisine, the food in Yamhill Valley is also strikingly diverse for its size. Culinary inspirations from all over the globe — Italy, Spain, Latin America and more — can be found within a stone’s throw of one another on Third Street in McMinnville.

“We’ve been very fortunate, just down Third Street, a diversity of food and chefs,” explains Ricardo Antunez of Pura Vida on Third Street. “McMinnville has attracted a lot of young chefs that aspire to do something different. That’s the reason I came to McMinnville, I knew it was a good area for different cuisine, that people would respond to it.”