Toast to the roasters 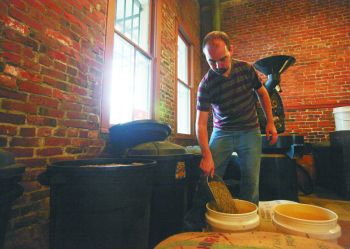 When you think of the Yamhill Valley, wine is probably one of the first things that comes to mind. There’s also a rich and growing array of breweries in the region, and kombucha, a kind of fermented tea, is growing in popularity. But there’s another kind of beverage quietly produced, and produced very well, for a couple of decades now.

From coffee houses to large production facilities, a small knot of coffee roasters in McMinnville and Newberg produce a product so much more then hot water and beans. Some have been here for a long time, and some are very new, but all take a great deal of pride in their product. Much like fine wine, high quality coffee is a matter of carefully growing a product and processing it in a way that accentuates the best of its flavors.

“Coffee is a tree, a tropical tree. It cannot survive a frost,” explains Pete Miller of Newberg’s Caravan Coffee. “The tree will, more than likely, be grown at higher altitudes; that’s where it thrives. It needs some shade. You get a cherry, and inside the cherry is a pit, and that’s the coffee seed.”

Miller arrived in Yamhill County in the early 90s to open a coffee shop, then started roasting his own product in 1996, when Caravan was born. Today, the company occupies a large roasting facility and warehouse just outside Newberg.

“You have to remove the fruit from the pit and dry that pit in order for it to be shelf stable, to about 10 percent humidity. It’s packaged up in burlap bags and sent to consuming nations like America,” Miller continues. “We coffee roasters get this unroasted seed that’s about half the size of the roasted coffee. Like a winemaker, perhaps, our job is to bring out the best flavor of the seed by the way we roast that coffee.”

“Each of those has their own unique flavor and history,” he said. “The Sumatra coffee is very fruity flavored, which comes from the soil and the pollination of the fruits nearby. Our Columbian coffee has a more syrupy, sweeter flavor to it.”

Miller compares the different flavors in coffee to wines he’s tasted. While Central American coffees remind him of pinot noir, with their bright, clean flavors, Sumatran coffees tend to have darker, earthier tones.

“It reminds me more of a cabernet, with big body and big fruit to it,” Miller notes.

Those different flavors can vary even within a country or region, and the contrasts can be dramatic.“From Ethiopia, you can have a Sidamu or a Yegurcheffe that tastes citrusy, you can go to a neighbor who has one that can taste a lot sweeter. Some even taste like a blueberry,” explains Paul Allen, roast master at Caravan Coffee. “That’s all in Ethiopia, different regions.”

Allen also notes that coffees can taste different based on how they're processed once picked. There’s a number of different techniques that can be used to separate the fruity part of the coffee cherry from the pit. Some farmers place the cherries in a fermentation tank, called a “wet” process, while others dry the fruit on the ground, the “dry” process.

“We can taste those two coffees — same bean, same tree, done with two different processes — and it tastes different,” Allen said. “The farmer has that much leeway. The world’s open to how many flavors you’re going to get.”

There’s a time factor, too. Just as the same wines, made from grapes grown in the same place, processed the same way, taste different depending on when the grapes were grown, differences in growing seasons can influence the flavor of coffee. Nick Walton, owner of Mud Rover Coffee Roasters, is currently selling an Ethiopian Yergacheffe coffee that’s one of his favorites, but it won’t be around long.

“It’s not something where you can get this Yergacheffe forever. We might be out of it in a month. We might have it for another two or three months. It’s constantly rotating,” he explains.

Mud River started in Portland but moved to McMinnville in 2009 and opened Chrysalis, a coffee house in the Granary District. While much of Mud River’s operation is wholesale, Chrysalis is where Walton displays Mud River’s ever-changing range of single-origin coffees.

“We want to be hunting, we want to be searching, we want to be finding the next really great coffee, because it is a yearly cycle,” he sayd. “We develop these relationships with the farmers that are growing the coffee. We’ve got this farmer in Nicaragua, and we’ve bought from him for a few years now. What’s cool is it’s always good, but it’s always a little different. It’s not like it’s the same coffee every year.”

Once the coffee is found and purchased in raw form, then the roasters come in. Allen explains that the coffee is weighed out and loaded into a roaster, a large rotating drum that’s sort of like a gas-fired super dryer. It usually takes about 15 minutes to go from raw bean to roasted coffee, but the exact parameters of that process, the exact timing and the temperature, are what gives the final product its subtle variations. It’s a science and an art, Allen says.

“You’re watching the coffee go from this green bean, almost double in size, and then getting that second crack, you’ve got choices galore. You take it out, and you hope it’s just beautiful. There is an artist’s touch,” he explains. “We have a computer program that gives us that information, but you can’t take the human element out of it. You need to be there, as a human being, to smell, taste, decide, make decisions, ‘Now’s the time to pull it out,’ because that will change the flavor immensely.”

Pace, who started roasting when he purchased Cornerstone six months ago, is drawn to that artistry.

“I didn’t know anything about coffee roasting. I had to learn very quickly, it’s been a pretty big learning curve,” he said. “To listen to the coffee and look at the coffee and make sure it’s the same as the last time you roasted it. Getting to know the coffee so much that you can just listen to it. Getting the chance to be creative with the coffee.”

The creativity and variation from coffee to coffee is what separates a quality, artisan product from just a “cup of joe.”“I talk to people all the time and they think ‘coffee is coffee.’ We get them to our cupping table and we put a couple of different cups on the table and compare the flavor of them, and I think people are surprised at how different coffee is,” Miller says.

“Some coffees pair well with dessert. We’ve offered a really fruity coffee that’s Ethiopian, naturally processed, with a real blueberry note to it. That would pair really well with chocolate; it’s fantastic,” Miller explains. “That coffee wouldn’t be a good breakfast coffee; it’s too fruity. You’d probably want a Central American coffee with breakfast. It’s bold, it’ll stand up to the omelet you’re having and complement that well.”

It’s those variations in flavor that keep Walton excited about finding, roasting and selling what he calls “the next really great coffee.”

“It’s a treat. Not only do we do ourselves a disservice, but we do the treat a disservice when we approach a treat in life as if it’s a necessity,” he said. That’s why I don’t like bad coffee and I don’t like making coffee poorly. There are more individual flavor compounds in coffee then there are even in red wine. There’s more flavor, more potential things to taste, in coffee, than in almost any other food.”