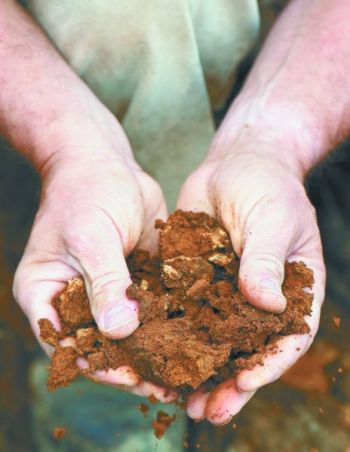 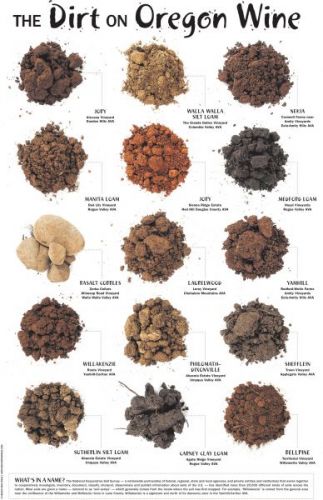 SOUVENIR: Purchase "The Dirt on Oregon Wine" poster (12 X 18 inches), a visual display of various soils found throughout the state's wine country. Click on the poster to shop.

The federal government has authorized 17 American Viticulture Areas in Oregon. Six of those can be found in the Yamhill Valley, each with a distinctive topography, entrepreneurship waves, microclimates and soil characteristics.

“The main reason Oregon and the Yamhill Valley are a fine viticultural area is global positioning. We sit on the western edge of a large continent at a temperate latitude,” said Kevin Chambers, co-owner of Resonance Vineyard. “I believe climate trumps soils, and it’s our climate first and foremost. But our soils are also rather unique and complex. They range from some of the deepest alluvial deposits on Earth, to eroded basalts, uplifted seabed sediments (some with submarine volcanic intrusions), and wind-blown loess.

”The soil diversity is just one — albeit an important one — of a handful of complicated factors in an equation that results in distinguishing the wines from each region. While climate and topography also play major roles in the character of the wine, the soils and parent materials are crucial factors in what makes the Yamhill Valley so unique and perfectly suited for Pinot Noir.

The Dundee Hills, established in 2005, encompasses 12,500 acres — with more than 1,700 planted to vines — and overlooks the Willamette River to the south and the Chehalem Valley to the north. Protection from the ocean climate is provided by the Coast Range.

The unique characteristics of the soils from this region began developing between 15 and 17 million years ago when basaltic lava flowed west from Eastern Washington to the Dundee Hills. While in most parts of this region the basalt eroded over time, a few ribbons of these ancient volcanic flows remain in the red hills of Dundee and their iron-rich Jory soils (the state soil of Oregon).

“Dundee Hills fruit has more predominant spice characteristics — cinnamon, clove, allspice, cardamom with a dose of ripe plum and cherry,” said winemaker Don Lange of Lange Estate. “These generalizations are influenced by elevation and aspect, to be sure, but the spice from the volcanic Jory soils seems pretty consistent vintage to vintage.”

Established in 2006, the Chehalem Mountains AVA consists of almost 70,000 acres with over 1,600 planted to winegrapes.Three soil types are represented basaltic, ocean sedimentary and wind- and flood-deposited soils called loess.

The Adelsheim family bought land in what would become the Chehalem Mountains in 1971. “We purchased our first piece of property, now known as Quarter Mile Lane Vineyard, in the great landslide region on the southern slope of the Chehalem Mountains,” said founder David Adelsheim, who was interested in the area for its southern exposure, volcanic soils and the support of his new neighbors, David Lett and Dick Erath.

For him, there really is no single character of the wines from the Chehalem Mountains because of the vast diversity in soil, elevation and exposure. But some characteristics have been applied to certain soil types in the region. For example, he says wines from basaltic soils tend to feature mineral focused, red-fruited, elegant Pinot Noirs. Those made from fruit planted in loess soils exhibit spicy, rustic, red-fruited wines; and the wines from sedimentary soils can present black fruit and briery Pinots with fine tannins.

“The sedimentary clay loam is notable for its mottled appearance and irregular characteristics,” Tunnell says. “If you look out at our vineyard on a clear spring day before all the canopy has formed, you can clearly see that some hillsides are somewhat reddish, others almost sandy white and some appear a darker chocolate brown.“

The result of the consistent soils is distinct and recognizable wines from largely low vigor vineyards showing much less leaf than those of deeper soils and thinner canopies for greater airflow and less disease pressure.“

There is a lot of variation from producer to producer, so it’s hard to generalize, but I would say the one consistent trait is a kind of earthiness, underbrush and bramble that I don’t find in wines from other appellations as much,” Tunnell says.

Established in 2006, the Eola-Amity Hills AVA is almost 40,000-acres with more than 1,300 of planted vineyards. The region is adjacent to the Willamette River and composed of the Eola Hills in the southern end and the Amity Hills in the north.

Aeolus, the ruler of winds in Greek mythology, was the namesake the pioneers attached to one of chains of hills surrounding this area, and for good reason. The cool, coastal winds flowing into the region by way of the Van Duzer Corridor are largely thought to play a key role in the style of wine produced here. The most prevalent soil, volcanic Nekia, is also a major part of that equation.

“The common wisdom is that the Eola Hills are primarily basalt, and shallower and more weathered than the Dundee Hills to our north,” said Ted Casteel, founder of Bethel Heights Vineyard and key figure in forming the sub-AVA. “The generalizations are useful, but the geology of our region has been quite active and remains so, as the Pacific Plate moves east and north incrementally year after year, subducting under the Continental Plate and scrunching up geological features, like the Eola Hills, from the valley floor.”Casteel explained how not every earth-shaking and surface-changing event dates back millions of years, “We know about (Mount) St. Helens. One of our first harvests was covered with volcanic ash.”

Established in 2005, McMinnville AVA has nearly 40,500 acres, 600 covered in vineyards, extending roughly 20 miles south-southwest toward the mouth of the Van Duzer Corridor. The soils are primarily shallow uplifted marine sedimentary loams and silts, with alluvial overlays and a base of uplifting basalt. The volcanic material is some of the most youthful in the valley and creates dark, intense wines.

Scott and Lisa Neal, winemakers and proprietors of Coeur de Terre in McMinnville, planted their first vineyard in 1999. They chose the appellation for several reasons, not the least of which was the unique soil composition and weather patterns which they hoped would result in very special wines.

“Diverse soils; this is the true beauty of Mac AVA,” says Lisa Neal. “On a 50-acre piece of property, we have sedimentary, or Willakenzie-like soils, on the lower elevations around 400 feet. Midway up the property — where the Coeur de Terre Rock is located — the soil contains fractured basalt rock layered in ancient sediment. At the upper elevations of the property, we move into the volcanic soils.

”The variety allows the Neals to plant their blocks according to the different soils, producing block-designate wines.

“Pinot Noir is a bit clearer,” Scott says. “Pinots from Mac tend to maintain their acidity and have very robust tannin and color density. The flavor-aroma profile leans toward darker fruits and bramble notes commonly affiliated with a spice characteristic.”

Established in 2005, Yamhill-Carlton contains 60,000 total acres and lies north of McMinnville at the foothills of the Coast Range and centered on its namesake towns Yamhill and Carlton. The AVA is surrounded by low ridges in a horseshoe shape called the Spencer Formation, with the North Yamhill River coursing through.

Favored with some of the oldest soils in the valley, Yamhill-Carlton features ancient marine sediments. The coarse grain nature of the soil drains quickly, establishing a natural deficit-irrigation effect. This feature encourages vines to dive deep into the parent material bedrock for nutrients.

Ken Wright, proprietor and winemaker for Ken Wright Cellars Tyrus Evan Wines, is also an established grape grower, working with several vineyards throughout the AVA. For him, Yamhill Carlton’s old sedimentary soils make it an especially unique place to make wine, but he appreciates the special attributes of each region and was a key figure in the initial formation of the sub-appellations.

“We talk about geology because it has such an incredible influence on the traits you see in the wine,” Wright says. “Back before anybody was really doing single-vineyard [wines], we were, and because we were working with all these different sites, we started seeing these patterns. In a broad, general way, volcanic areas tend to produce Pinot Noirs that are more fruit-focused, and the sediment areas tend to produce more floral and spice elements.

“The ability of the plant to convey and relate to you to its place is just unbelievable.” ■