Rollbarrel making - Out the Barrels 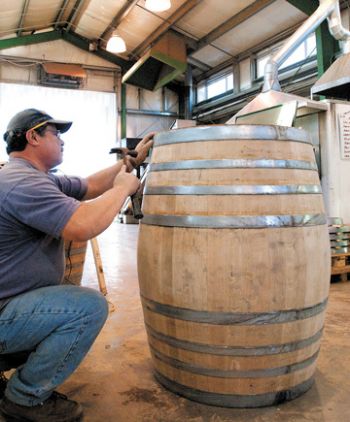 Barrel making, a highly skilled craft, dates back centuries. Modern-age mechanization may have streamlined certain aspects of the tedious process, but handcrafting remains at the core of the finished product.

That reality is evident the moment you step onto the production floor at Oregon Barrel Works in northeast McMinnville. Working in tandem, a tight-knit team of four coopers employs time-honored techniques to create a precise form of artistry in wood.

Outside the entrance, Jorge Nieto looks over a shipment of freshly cut Oregon oak, just delivered by a Sheridan supplier who relies on private stands in the northern Willamette Valley.

Owner Rick DeFerrari scans the scene with an experienced eye. Having learned barrel making from European masters, he strives to put out a top-end New World product that equals the finest from the Old World.

DeFerrari, who grew up in the rural Scholls area near Beaverton, came to this specialized calling by an interesting route.

Ponzi Winery was nearby and he landed a job there as a cellar rat. The experience made him appreciate not only fine wine but also what went into making it.

At the time, he was finishing up his studies at Oregon State University in forest engineering.

Hmmm. Wine and wood. Ultimately, the two would make for a most fortuitous fit.

First, however, DeFerrari decided to pursue work in the field his formal education had trained him for. He wound up on Prince of Wales Island, off the southeastern Alaskan peninsula, conducting environmental impact studies.

It was a six-months-on, six-months-off assignment, which meant he had an entire half year to do something else. That something proved a trip to Europe, where - what else? - he toured the oak forests of France.

At this point, the young Oregonian's wine and wood connection came full circle.

He visited one of Burgundy's most famed barrel cooperages, Tonnellerie Francois Freres. Before you could say "Limousin," he had signed on for an apprenticeship.

He spent 1992-93 with Francois Freres, absorbing every step in the cooper's art. He returned home with an agreement to represent the firm in the Pacific Northwest, marketing barrels fabricated in a Freres facility in California's Napa Valley.

For the next several years, DeFerrari burnished a lot of winery relationships, sold a lot of barrels and took the business to another level by introducing Oregon oak as an alternative source material.

After Francois Freres went public in 1996, it became a corporate arm of Demptos, a major French cooperage whose principal production was barrels for France's famed Bordeaux region.

The U.S. subsidiary, Demptos Napa USA, was still marketing barrels through DeFerrari, including barrels crafted of Oregon oak. But he began to get feedback from local wineries that a cooperage actually located in the Northwest would better serve their growing needs.

In 2000, he parted ways with the company and began laying plans to go into business for himself. Two years later, he opened Oregon Barrel Works.

He equipped his plant with machinery from France. It was all at least 40 years old, but it had been refurbished.

DeFerrari's four coopers turn out 30 to 40 custom barrels a week. He handles the management and sales by himself.

That makes Oregon Barrel Works "probably the smallest commercial cooperage in the world," he said.

"The largest cooperages can turn out as many as 150 barrels a day," he said. "But they have half-million-dollar machines, and there's still no way around doing a lot of the work by hand."

Since no stave is precisely the same width, assembling a barrel becomes a bit like fitting the pieces of a puzzle together. Each barrel is unique.

Toasting or charring the inside of the barrel, which allows the wood to impart its vanillin tannin flavor to the wine, is very much a matter of winemaker preference.

Light, medium and heavy toast are the basic levels, but someone might want a more nuanced level, like light-plus or medium-plus. Oregon Barrel Works can do that.

Dozens of stacks of oak barrel staves, stored alongside the Oregon Barrel Works building, attest to the long-term investment it takes in this business. The staves will spend three years out in the elements.

The industry calls it air-drying, even though the wood is exposed to every kind of weather condition. In actuality, it's seasoning or curing, which serves to reduce assertive tannins.

Despite current economic conditions, DeFerrari is bullish on near-term prospects for the Oregon wine industry.

"Our sales in 2008 were up 40 percent over the previous year," he said. "And we're out of production time for first quarter orders already."

At $1,000 a pop for his standard 60-gallon product, that seems a solid indicator of willingness on the part of local wineries to make a commitment to the future as well.