A winemaker at this place and this time 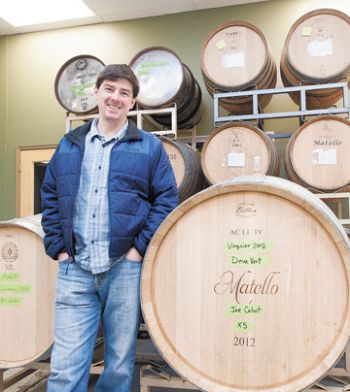 Marcus Goodfellow launched his wine brand in 2002 with 186 cases of pinot noir made at David Autrey and Amy Wesselman’s Westrey Winery in McMinnville.

He called the fledgling operation Matello, which means “little fool” in Italian. He explained it this way: “I’ve always had an affinity for jesters and fools, and it seems to be a bit of a totem. Whether it suits the winery or we suit the fool is beyond me. Perhaps a bit of both.”

Goodfellow’s self-deprecating demeanor undoubtedly helps him maintain perspective in a world where Murphy’s Law is transcendent. His focused approach minimizes the ever-present possibility that something could go wrong and probably will.

On the other hand, his serious side belies a playfulness that tends toward the philosophical. Take, for example, the quote greeting visitors to the Matello website:

“We shall not cease from exploration and the end of our exploring will be to arrive where we started and know the place for the first time.” - T.S. Elliot

Whether or not Goodfellow has yet rediscovered the place from which he came, he knows well where he is today, how he got there and what it means to be a winemaker in this place at this time.

As a farm boy growing up in near Silverton, he formed a strong attachment to the land and a powerful respect for its significance. But growing winegrapes and making wine were still a few steps away.

“I took a weird route to get here,” he said. “I majored in kinesiology, the study of body dynamics, at Pepperdine University in Southern California.

“My fascination with this field stemmed from the fact that I grew from five foot to six foot in height in less than three years. I became something of a perfectionist along the way, which carried over into everything I did.”

One of the things he did was to work in restaurants in the L.A. area, where his farm-centered youth raising livestock and growing food intertwined with its final destination at upper-end eateries.

Perhaps even more important, that work experience introduced him to the world of wine and, not incidentally, the character a wine derives from the soil in which the grapes are grown.

“I had the opportunity to taste some of the best imported wines and discover the signature character of the type,” he said. “I also met well known people in the business who encouraged and mentored me.”

In 1994, he decided to return to Oregon. With the experience gained in L.A., he was able to land a job at The Heathman Hotel in downtown Portland.

The hotel’s eponymous restaurant boasted one of the region’s finest wine lists, not to mention Philippe Boulot, one of the most gifted chefs to command a commercial kitchen in the Beaver State.

During his years at The Heathman Restaurant & Bar, Goodfellow rose through the ranks to became the wine buyer. In that role, he met virtually everyone who was anyone in the industry.

Those acquaintanceships grew into friendships, and they would come into play when he began making his own wine.

Of all the fine wines from around the world, one stood at the top of his preferred list. That wine, pinot noir — specifically, Oregon pinot noir — captured his full attention.

As he has said, “It is a fickle grape that only grows and produces the extraordinary wines it’s capable of in places with the perfect geography, soil and climate. Oregon’s warm dry summers and cool, prolonged fall are ideal for ripening this unique and beautiful grape.

“It takes a remarkable confluence of great vineyard site, great farming, and great weather, along with care, respect, and attention to detail in the winery to produce the world class pinot noirs that Oregon does.”

Carrying this belief to its ultimate expression, he also said, “My one consistent demand is that the vines not be irrigated. I believe in terroir — that there is a voice to each special place that Pinot Noir is grown and that irrigation is not a part of that voice.”

From those first 186 cases to the nearly 3,300 produced from the 2012 vintage, Goodfellow has adhered unswervingly to that philosophy.

He made his wine at Westrey through 2005. Then he moved to larger quarters at Dean Fisher’s ADEA Winery in Gaston.

That arrangement lasted through 2010, as Matello production rose from 800 cases to 2,000. At that point, he said, “The time had come to be a winery on our own.”

Goodfellow had his eye on a building in McMinnville’s Granary District, also called the Pinot Quarter because of the cluster of wineries in the vicinity.

“Like so many of the buildings there, this one belongs to Kelly McDonald,” he said. “We came to an agreement, and even got a brand new look in the bargain.”

He is referring to the horizontal natural wood plank treatment that now adorns the winery’ exterior at 925 N.E. 7th Street. The handsome facade attracts many admiring looks from motorists heading north on Lafayette Ave.

It wasn’t until 2009 that Goodfellow finally quit working in Portland and moved to McMinnville. Now that he is firmly ensconced in new quarters, he can fully concentrate on the job at hand.

“I love whites as much as reds,” he said. “I just can’t help myself.

“Being exploratory, constantly seeking to learn more is in my nature. So I’m following it right along while bowing to Mother Nature.”

Collegiality is another trait of his, and it fits the Oregon wine industry to a "T."

“You learn so much talking with other winemakers and growers,” he said. “And, of course, I have tenants.”

He is referring there to Grochau, Love & Squalor, Vista Hills and Ribera, all of which are currently sharing space and equipment with him under the Matello roof.

“We have a solid synergy,” Goodfellow said. “I can’t tell you how much it adds to the enjoyment of what I’m doing.”