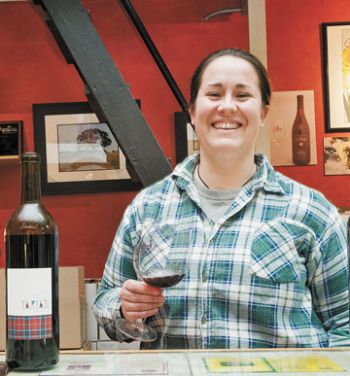 Marcus Larson/News-Register
Amity Vineyards’ winemaker Darcy Pendergrass shows off a tempranillo and a dolcetto, the first wines under her own Tartan label.

Scotland is known for whisky, not wine. But Darcy Pendergrass has come up with an Oregon connection that could change that locally in a low-key, high-quality way.

The wine is called Tartan. Its label bears the distinctive plaid design of Clan MacTavish, whose ancient lineage she can claim.

Pendergrass, head winemaker at Amity Vineyards since 2007, said she has dreamed of making a wine she could call her own almost since the first day she began working as a cellar rat.

That would have been Feb. 1, 2001, at Amity Vineyards, owned by her mentor, Oregon wine pioneer Myron Redford. It was under his tutelage that she became an accomplished winemaker in her own right.

Affirmation of her abilities was already evident by 2006, when the owners of Sunnyside Vineyards, one of Amity Vineyard’s key fruit suppliers, approached her with a proposal.

“They had grafted about an acre each to tempranillo and dolcetto,” she said. “They wanted me to make wine from it to see how varieties they hadn’t grown before were coming along.”

Here was the opportunity Darcy had been waiting for: First, a noted vineyard with fruit that, although young, had the head start of grafting. Second, a small quantity that wouldn’t break her budget.

She and Redford signed an agreement allowing her to operate under his license and use his processing and fermentation equipment. She bought the grapes from Sunnyside and purchased her own aging barrels.

That first tangible step toward a wine she could call her own traces its path back to the early 1990s. Before immersing herself in winery work, Pendergrass had envisioned a career in microbiology.

After graduating from high school in 1994, she enrolled at the University of Montana in Missoula with that goal in mind.

“Once I got involved in the program,” she said, “it quickly became apparent that microbiology, which was the area that fascinated me, required a thorough knowledge of chemistry.

"I had to wade through a lot of boring stuff to earn my degree in microbiology, but I did it. Then, because I had purposely chosen a college a long way from home, I wasn’t going back any sooner than I had to. So I became a hotel manager and ski bum.”

Eventually, the novelty wore off and Pendergrass realized she needed to get on with her life. She returned home to Florence, Ore. There, she made a decision that would set a new course for her future.

“I heard that Chemeketa Community College had started a wine program,” she said. “It occurred to me that I could apply my microbiology knowledge to winemaking.”

There, she became acquainted with Patrick McElligott, a Northwest Wine Institute faculty member who knpws the Oregon wine industry inside and out.

McElligott had managed the Oregon Wine Tasting Room in Bellevue for 20 years. The business was owned by Redford in partnership with is wife, Vikki Wetle. In 2001, McElligot facilitated Pendergrass’s hiring for a job in the Amity Vineyards tasting room.

It wasn’t long before Redford recognized the value of her knowledge of chemistry and experience working in a lab. She had just begun to study enology, but Wetle, who was running the winery’s lab operation, was willing to expedite that.

Working side by side with the winery duo, Pendergrass learned every aspect of the operation. Though she now has that side down, she admitted, “I need to learn more about the vineyard.”

She was soon given sales responsibilities, which required regular visits to retailers and restaurateurs. In the winery and in the field, she was exposed to everything a winemaker encounters in the workaday world.

Adding depth to the experience, she went to New Zealand in 2005, and again in 2007, to work the harvest at Dry River Winery in Martinborough. The owners there are friends of Redford, and that’s how the connection was made.

By 2007, she had amassed enough knowledge and experience to begin overseeing winery production on her own. And the need soon arose, as Redford came down with an excruciatingly painful case of shingles that year.

“Not only did I have to run the winery,” she said, “but I had to stay away from Myron, because I’ve never had chickenpox. If I caught them from him, it would have been far more dangerous for me, as an adult, than it would have been as a child.”

Fully recovered later that year, but apparently ready to slow down, Redford officially handed full-time winemaking responsibilities over to Pendergrass.

He had already demonstrated his confidence in her when he encouraged her to launch her own label in 2006. Now, it was up to her to juggle both responsibilities.

The outstanding wines that have emerged high on the southwestern slope of the Amity Hills over the past several years are proof-positive of her success.

“Darcy is a very capable winemaker,” Redford said. “She’s got the nose for it, and she’s not afraid to be adventurous. She is particularly good with red wines. I hardly have to do anything these days except give a final nod to the wine before bottling,” he concluded.

In adding a white wine to her label, Pendergrass contracted with Croft Vineyard for sauvignon blanc fruit.

My first commitment is to Amity Vineyards,” she said. “It’s great to have my own label, but I can thank Myron for giving me the freedom to do that, and I’m making sure I live up to his expectations.”