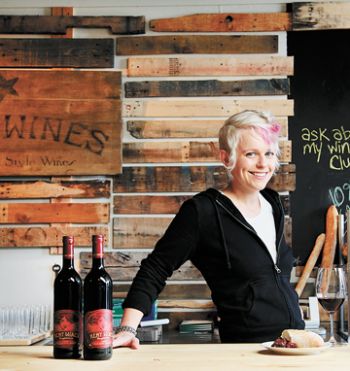 At the age of 8, most of us were still trying to figure out what life was all about. If asked what we hoped to be when we grew up, most of us would probably have responded with a fantasy or shrug.

Something techie might even be among the glamorous jobs crossing our minds. But certainly not winemaker.

That’s what makes the starting point so remarkable for Remy Drabkin. Definitely her own woman — decisive, determined, even a bit daring — she decided back in the third grade that she wanted to be a winemaker.

The catalyst for this precocious career choice sprang from the lifestyle her parents, Jules and Joan Drabkin, so pleasantly pursued after moving from Southern California to McMinnville in 1970.

“My dad became a well known attorney in town,” Drabkin said. “He and Mom both loved wine, and they quickly got to know the local winemakers.”

Back then, she noted, the wine community was smaller and even more closely knit than today.

“Everyone went to Nick’s,” she said, referring to Nick’s Italian Café, which opened on Third Street in 1977. It was the wine industry hangout for years.

“My mom even went to work for Nick,” Drabkin said. “Then, when IPNC got started, she served as culinary director from its first year in 1987 through 2002. So, yeah, we became quite close to local wine people.”

The list of wine people Drabkin has known since childhood is so long, she said, “I wouldn’t want to forget someone. So I’ll just say that Rob Stuart and Luisa Ponzi probably influenced me the most.

“The Ponzis gave me my first winery job during the 1994 harvest. I was 13 years old and I did anything they asked me to. Then I worked as a cellar rat at Erath through high school under Rob.”

After graduating from McMinnville High in 1998, she decided to travel before going on to college. Her initial destination was Israel, where she lived and worked for a few months on a kibbutz in the Golan Heights.

The Israelis were growing grapes and making wine. From there, she chose to go to Burgundy to study winemaking, as Luisa Ponzi had done several years earlier.

“I enrolled at the Lycée Viticole de Beaune,” she said. “It was a great experience. I know some French, so I got a lot out of it. But the technical classes were really tough."

Her next adventure came the following year, in 1999. She returned home, only to be enticed to Pittsburgh by a relationship that ultimately didn’t work out.

To support herself in Pennsylvania’s “three rivers” city, Drabkin went to work at an Italian restaurant, where she became caught up in the character and cachet of Il vino Italiano.

Returning to McMinnville, she landed a job at Argyle Winery and began making small batches of wine in her laundry room. The varietals she chose were Italian — barbera, sangiovese and nebbiolo.

The turning point for her own Remy Wines venture came in 2006. That year, she planted a 10-acre vineyard on Breyman Orchard Road, in the Dundee Hills, and made the leap from home hobby to bonded winery.

Drabkin also fell in love with an Italian grape variety almost no one in Oregon had ever heard of. Its name is lagrein and its origins are in the Italian Tyrol, or Alto Adige, along the southern slopes of the Alps.

Aggressively productive and assertively acidic when young, it can become quite mellow and appealing with barrel aging. Italian winemakers recommend 18 months, but Drabkin prefers 28.

A grand total of one acre of lagrein was growing in the entire state at the time.

To help rectify that situation, she devoted two acres of her Lone Madrone Vineyard to the variety. Lagrein has a mind of its own, but the challenge of taming it appealed to her.

Drabkin originally occupied shared winery space near Gaston. But in 2009, she opened her own quarters on the northern edge of the Granary District’s Pinot Quarter in McMinnville.

From this winery have emerged wines carrying both the Remy and Three Wives labels.

Remy Wines is a premium brand featuring sangiovese, barbera and syrah, as well as lagrein and a just-released 2010 dolcetto. The sangiovese and barbera are priced at $22, the syrah $25, the dolcetto $35 and the lagrein $48.

Three Wives Wines offer customers the opportunity to experience character based on craftsmanship at a more modest price.

Between the first releases in 2006 and the most recent 2012 vintage, annual production of all Remy Wines has increased from 600 to 2,000 cases. A smattering of whites is offered along with the reds.

Perhaps the only regret in regard to this talented young winemaker’s wines is that she makes them in small batches, so they sell out quickly. If you like something, you need to make your move before it’s all gone.

Karl Klooster can be reached by e-mail at kklooster@newsregister.com or by phone at 503-687-1227.