Amity Vineyards in for the long haul 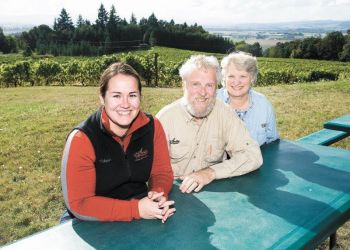 With the 2011 harvest fast approaching, Amity Vineyards co-owners Myron Redford and Vikki Wetle sat at a picnic table affording an unimpeded view to the southwest across their Amity Hills vineyard. Past the 14 acres of estate vines the wine-wise couple could see a broad swath of the Yamhill Valley's expanse, culminating in the foothills of the Coast Range.

Predictions of rain, clearing, resumption of rain and clearing again were changing almost daily. Redford sized up the situation this way:

"I learned early on not to panic about bad weather and pick too early. I've always waited through late-season rain and let 'em hang until they're ripe. And it's always paid off, except for 1984."

That single sodden season was the only complete washout since Redford arrived in 1974. With help from his mom, Redford and Janis Checchia acquired the hillside land and five acres of vineyard planted by Jerry and Anne Preston in 1971.

Back then, he was among a handful of intrepid pioneers given slim odds of succeeding. Over the years since, he has been an active and involved participant in and important contributor to the industry's growth.

He has mentored many budding young winemakers who have gone on to successful careers and even more interns from foreign countries and other parts of the United States who have returned home to make solid contributions to their own wine industries.

Like Lett, Erath, Adelsheim and Ponzi, Redford was on the cutting edge. Almost everything he did was experimental, untested.

There was no guidebook pointing to the right path, no manuals providing step-by-step instructions. He made it up as he went along.

To be sure, those early stalwarts got together regularly to discuss, argue, compare notes and ponder before going back to their respective vineyards and wineries to put some of the collectively considered ideas into practice.

Redford was as adventurous and innovative as any of them. He made a successful Beaujolais Nouveau style pinot noir in 1977, taking a calculated risk on something that had never before been done in Oregon and done only a few times in California.

In 1980, his first pinot noir releases garnered regional gold medals. In 1987, he was one of the key players in the launch of the first International Pinot Noir Celebration. In 1988, he released the first "true" American Beaujolais from gamay noir grapes.

Redford and Wetle met in 1980 when Wetle, then a nurse, visited the winery to participate in one of the final harvest parties. She said Redford's mother invited her to stay for dinner, and she never left.

The most challenging year in recent times was 2005," Redford said. "One of the wettest springs ever, then rain and cool temperatures right at harvest, put us in a tough spot. But then the weather changed late and we brought in ripe, well-balanced fruit.

"This is another example of the fact that if you give pinot noir a few years of bottle age, the rewards will be well worth your time and patience."

Redford adheres to organic practices in the vineyard, and has turned winemaking duties over to his protégée, Darcy Pendergrass. He re, who let the wines makes themselves with minimal manipulation and limited oak contact.

Redford recalled, "When I first started out, I adopted the philosophy of one of the Napa Valley's great early winemakers, Louis Martini. He said, 'I want to taste where the wine was grown, not the container in which it was aged.'"

Long-lived riesling, in styles ranging from bone dry to lush dessert, have risen to share the spotlight with pinot noir. Newer on the scene is a stylish, richly flavored sauvignon blanc. The winery also produces a classic, dry gewurztraminer

When asked about future production plans, Redford said, "10,000 cases. "That's the maximum our winery handles well and that is what we're aiming for on an ongoing basis."