An informal Q & A with Dick Erath 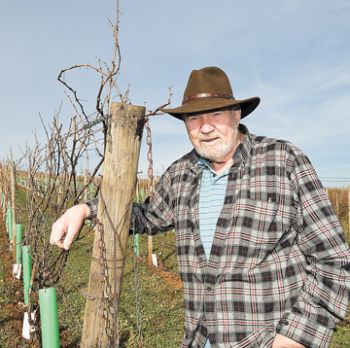 When it comes to the truth of the matter about any human endeavor, nothing beats having been there. Over the five years from 1965 through 1969, you could count all those involved in Oregon's wine industry on one hand, and Dick Erath was one of them.

He came to the Yamhill Valley in 1967. He was preceded in that journey only by Charles Coury, David Lett and their wives, who were tending some very young vines, still looking forward to the day when they could actually begin to make their first barrels of wine.

The only other person on the Oregon wine scene at the time was trailblazer Richard Sommer. First by four years, he founded HillCrest Vineyard - the state's first post-prohibition winemaking operation - in Roseburg in 1961.

Erath became an integral part of the effort to build today's burgeoning industry, starting from the ground up. So his recollections bring first-hand perspective to the struggles and successes of those early times.

KK: You were in high-tech, but you switched to wine. You went in an entirely new direction in a totally untested place. What motivated you to do that?

DE: From the time I was a little kid, I had a natural curiosity. There was always something new to be explored. I planted corn in the backyard of our house in Oakland when I was 5 years old. I always liked to see things grow.

Then, when I was a Cub Scout, I built a crystal radio set. It worked well enough that I could hear KGO in San Francisco, which had the most powerful signal in the Bay Area.

But since the set picked up the most powerful signal, I started receiving the broadcast from this ham radio operator down the street. I got to know him and he really got me hooked on electronics.

When I was in high school, I started fixing TV sets for people. I kept up my interest through college, and after graduation, I got a job with Shell Development in Emeryville.

I had studied metallurgy in college and now, here I was, surrounded by biochemists, experimenting with all the stuff you could make from crude oil. But I had made beer in college, so I could relate, as fermentation is an organic science.

When I was at Shell, I was introduced to wine. The first great pinot noir I had was a 1955 Inglenook, and I've been into pinot ever since.

I also love to cook.

My great-uncle had a restaurant in San Francisco. My dad worked for him and it rubbed off on me.

I left Shell to work for a new electronics company in Concord. The chief engineer had been hired from Tektronix in Beaverton, and we became such good buddies, we started brewing beer together.

KK: So when did you start making wine?

DE: When a couple of batches of beer went bad, we decided to try wine. We got fresh semillon grapes from Livermore and the stuff turned out pretty good. Then we planted our own vines on his property and I really started to get interested in wine.

But I was disappointed to discover that there weren't very many places in California where pinot noir grew well.

I was able to get into a class at UC Davis that was a refresher course for industry people. I met the famous Beaulieu winemaker AndrŽ Tchelistcheff there, and I asked the instructor why no one was growing pinot in Oregon, because the climate there seemed better suited.

KK: Had you checked out Oregon at all before then?

DE: Not yet. But he told me a few winemakers were already there. He mentioned Chuck Coury and David Lett. Then he said if I wanted some first-hand info right then, just go talk to that guy over there.

It was Richard Sommer. He had come down from Southern Oregon to take the class. And that's how I met Sommer.

We had a long conversation, and it made me even more convinced that, somehow, I had to get up there. Then the guy I had worked with in Concord gave me a call.

He had gone back to Tek and asked me if I might be interested in coming up to work for them. It couldn't have been a better opportunity. I could work in Oregon and pursue winemaking there as well. So I went up for an interview and got hired.

KK: When did you first meet Charles Coury and David Lett?

DE: After my interview in Beaverton I went over to Coury's place outside of Forest Grove. We talked until 4 a.m. I found out that he had bought the old Reuter's property in a foreclosure. He started working on the deal in 1964 and moved there in early 1965.

Anyhow, we hit it off, and from then on, I knew I was going to get into the business.

I tried to see David Lett, but when I went by his place, he was out selling books. I got to meet his wife, Diana, though, and after I moved up, I met David.

KK: So what about Coury? People say he was the inspiration, the idea guy who motivated everyone. Is that true?

DE: Chuck was a very bright guy, full of energy and enthusiasm. In his thesis, he wrote about the relationship between length of growing season and varietal maturity, and we were convinced he was right.

Unfortunately, he didn't have the follow-through. We went into the nursery business for a short time together, but I got frustrated. It just didn't work out. Somehow he couldn't get from A to Z.

KK: What happened with Coury's winery?

DE: Dave Teppola got involved in the winery. Eventually Dave founded Laurel Ridge and took over the operation. Chuck went on to pioneer microbrewing in Oregon with Cartwright Brewing in Portland. But that didn't work out either.

KK: So he was sort of a visionary. What happened with his brewery?

DE: Chuck was determined to put his beer in bottles, and he bought some antiquated bottling equipment - from the 1920s. But he could never get it to work right. He made good beer. If he had just put the stuff in kegs and sold it to taverns, he might have made a go of it,

KK: Since there were just the handful of you in those first few years, did you get together occasionally to talk about what you were encountering and do some socializing as well?

DE: Yes, we did. We got to know one another very well. For a time, Chuck and David were on the outs over something about some vines shipped from California that died. But in the long run, we were very close.

I remember particularly when we joined forces to get a nursery in Roseburg to stop selling virused vines. We couldn't let those vines get disseminated and the industry didn't need that kind of bad press. So we went to the state about it.

If the three of us hadn't worked together on that, we wouldn't have gotten the Oregon Department of Agriculture to move as quickly, and then it might have been too late.

KK: In your book, "The Boys Up North," you refer to the Holy Grail. Are you referring to the Dundee Hills or the best places to grow pinot anywhere in Northwestern Oregon?

DE: My first vineyard was on Dopp Road in the Chehalem Mountains. I bought the 49 acres there in 1968, as well as 10 acres in the Eola Hills. I planted Cal Knudsen's vineyard in the Dundee Hills in 1972.

I helped Jim Maresh put in his first vineyard on Worden Hill Road in 1970, and planted Prince Hill Vineyard next door in 1983. Top quality fruit has come off all those properties. So, as far as the Holy Grail is concerned, all I can say is, it's around here somewhere.

KK: There is some question about whether it was Lett or Coury who first planted pinot noir in Northwestern Oregon. I'm told that they both planted the variety in 1965. What's the reality?

DE: As far as I know, 1965 was the year, and since spring is planting time, I'm assuming they both planted then. The difference is that David planted nursery rows - babies to be used for propagation - and Chuck put in rooted vines.

KK: So the claim that Forest Grove makes about being the first place where pinot noir was planted in the Willamette Valley is accurate?

DE: That reminds me of a great story about Beethoven's birthday. He was born on Dec. 16, but his birthday is listed as Dec. 17. In those days, a baby had to live at least a day before it was considered viable.

KK: In other words, Coury may have put in the first vines, but his efforts didn't come to anything, whereas Lett was the one who survived and made it a thriving reality.

KK: What about Forest Grove using the slogan, "Where pinot was born." As you know, that has become a huge bone of contention. How do you feel about it?